Ninebullets Radio is a radio extension of the blog ninebullets.net that airs every Thursday night in Tampa, Florida on WMNF 88.5 FM at 10pm Eastern. The show is archived for one week after it’s original air date and is available for streaming here. Also, don’t forget to head over to Facebook and like the Ninebullets Radio page.

P.S.: If you like this show, do me a favor and post about it on your Facebook/Twitter/Blog. It’ll do a lot to help these bands reach new ears…and in the end, that’s what this is all about. It’ll also help bring the existence of the radio show to more people’s attention & the more people there are listening/paying attention to the show the more likely it is to stay on the air.

In the time I’ve been writing about these guys here on ninebullets they’ve gone from a little lovable band from the Midwest to “band to watch” status. Having completed nationwide tours with a whole list of ninebullets favorites such as Jason Isbell, Clutch, and William Elliot Whitmore, Bloomington, IL’s Backyard Tire Fire are back in 2010 on their own label and with a new album, Good To Be.

In previous reviews/articles I’ve routinely mentioned that these guys could have easily slid into the Capricorn-era sound. I can not say that about Good To Be. There may be the occasional Capricorn overture in their sound, but they’re wholly modern with their current sound. Problem is, the Capricorn-era feel was one of the things I genuinely loved about Backyard Tire Fire, so the first few listens of Good To Be left me wanting. After multiple listens, as tends to be the case, that wanting started to fade and I began to listen to the album for what it was, not what I expected it to be, and I finally warmed up to it.

The album opens with, IMO, it’s best song, “Roadsong #39”. It’s a fantastic grooving piece about (I imagine) running around the country in a rock and roll band. There is a line in the song that I love that says, “there’s a smell that I know at the end of the show, it’s sweaty and it’s smoky and it’s ripe and it’s rock and roll.” I think anyone who attends shows on a regular basis knows the origin of that line. “A Thousand Gigs Ago” treads in the touring band/van mindset, offering an uncompromising glimpse into the reality of being in a small touring band. Thing is, however, Micah Schnabel does it 100 times better, but I say that not to slam Backyard Tire Fire. Hell, I like the band, but I feel like they got lazy with this album. Specifically, I think they got lyrically lazy with this album and think that helps to explain why I liked the album more as I listened to it. See, I’m a lyrics guy, so the first time I listen to your album I am totally focused on the lyrics and I move out from there.

With that said, I’d say Good To Be is a steak dinner with Chinese food for lyrics. Musically, it has great grooves, it’s catchy and utterly enjoyable. Lyrically, it’s fine and totally “sing-along-able” but pretty thin under close inspection. Hopefully, this is just a blip, ’cause I *loved* the lyrical content of their last album, The Places We Lived. Regardless, this is 4 gazillion times better than Lady Antebellum and should be checked out.

Ever since Roger Hoover and The Whiskeyhounds became The Magpies I’ve been pretty disappointed in the musical direction the band has taken. That said, I still check out anything new they release on the off chance they might recapture that Whiskeyhounds spirit I’d so loved. So, when I saw they had released a new album, Strangers, I decided to check it out.

Right off the bat I recognized the songtitles “Vagabond” and “Blueberry Wine” as old Whiskeyhound songs and as the album played I quickly came to suspect that all the songs were old Whiskeyhound songs. A little digging through a cd rack proved my theory correct. Turns out, Strangers, is essentially redo of the Roger Hoover and The Whiskeyhounds album, Panic Blues. The songs are slightly revamped and the recording quality is vastly improved but 9 of the 11 songs on Strangers originally appeared on Panic Blues. At first, this felt lazy to me (and still does to some extent) but listening to the competing versions of the songs back to back leaves no doubt that the songs have been improved and honestly, Panic Blues was my favorite of the Whiskeyhounds albums so it would stand to reason I’d like Strangers. That said, I think I’m gonna follow Hoover’s lead and just copy/paste a slightly altered version of my thoughts when I originally wrote about Panic Blues:

“Sounding uncannily like David Gray of Marshall Tucker Band greatness, Roger Hoover sings songs that sound as though they could have been written long before his time. Much like I felt when I wrote about Backyard Tire Fire, the songs these guys write would have fit right into the Capricorn Records catalog perfectly. While most of the time they posses a decidedly southern rock sound they aren’t afraid to let their primal blues side out for a track or two here and there.”

The Magpies’ Official Site, The Magpies on myspace, Buy Strangers

In the time I’ve been writing about these guys here on ninebullets they’ve gone from a little loveable band from the Midwest to “band to watch” status. Having completed nationwide tours with a whole list of ninebullets favorites (such as Jason Isbell, Clutch, and William Elliot Whitmore), Bloomington, IL’s Backyard Tire Fire are back in 2008 with a new label and a new album, The Places We Lived.Recorded over the span of two weeks in Bloomington’s analog-only Oxide Lounge Studios, the band (along with co-producer Tony Sanfilippo) has allowed themselves to experiment more with recording techniques and sounds this time around, and the result has no shortage of people out there talking about the new direction the band has gone in. I’m of a slightly different opinion. I think the band has made a more matured and focused return to the sound of Bar Room Semantics, which finally allows the band to stand on its own, instead of being a band that would fit perfectly into the Capricorn-era rock scene.Check it out…The Places We Lived was released on Hyena Records today.Backyard Tire Fire – Everybody’s Down

Backyard Tire Fire are celebrating the start of their southward journey towards Langerado by releasing a free acoustic EP, Sick of Debt. Ed (singer) describes it as such:

“We loaded into Oxide Lounge in Bloomington, IL on a cold December afternoon (12.17.07) to record a healthy dose of some acoustic Tire Fire twang. There had always been talk of sitting down in the same room and doing a stripped down recording and we finally found the time to do it! Some of these songs are favorites that have been around for years and never found a place on an album, while others were written only weeks before. All of the tunes feature our good friend Jerry “Muttonhead” Erickson on either dobro or pedal steel guitar and were recorded live with minimal overdubs. The result is a raw collection of some of our finest acoustic material that we decided to make available for download at no charge. Please enjoy and pass it around” – Ed Anderson

In other news, the boys are making a few stops along the way to Florida. If they hit up your neck of the woods you should check ’em out. I sure wish I could. They have also completed the recording of their next album, The Places We Lived, which will apparently be coming out in August on a new, as of yet unannounced, label. 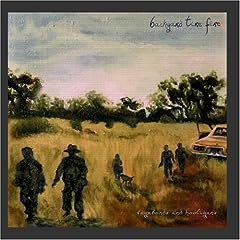 When I first posted about Backyard Tire Fire I said that their sound could have easily fit into any Capricorn-era album. With the release of their 4th cd, Vagabonds and Hooligans, they maintain the same basic sound but do so more confidently. That confidence has allowed them to venture away from their comfort zones a little on this release and the results are as solid as ever.

Vagabonds and Hooligans was co-produced by the band and Tony SanFlippo and recorded on a vintage early 70’s 3M tape machine in SanFlippo’s all analogue Oxide Lounge recording Studio in Bloomington, Illinois. The results are a very warm and record with a classic (see: Capricorn era) sound. One only needs to look so far as the title track to hear the these classic yet current results. The song, Vagabonds and Hooligans, is the type of song you wanna hear near the end of a whiskey night when you are ready for a little self-reflectance. Musically the title track has a barely restrained energy which helps to set the tone for the remainder of the cd.

The cd winds effortlessly between rockers to bar room sing-alongs. The gospel-flavored country anthem “Get Wise” shines a critical eye on the political landscape without taking an overtly partisan view. The chorus of Get Wise is definitely “stick in your head” material. Probably the most fun track on the cd is Tom Petty, a rollicking tongue-in-cheek view of the rock and roll dream. Downtime is the strongest track on the entire cd. A classic rock and roll song that harkens back to the glory days of the southern rock movement. This is the track that begs you to roll down the windows and make the people in traffic look at you funny.

While Vagabonds and Hooligans does not venture too far from the comfort zone Backyard Tire Fire do bring enough new elements to the table to keep from sounding stale. These guys are undoubtedly a band on the rise and this cd is as good a place as any for you to hop on and take the ride with them.

As Dave Terpeny from Kyndmusic says, “This is music that you drink to and sober up to, music that takes you places because the songwriter has been there and wrote about it.”

Vagabonds and Hooligans will be released on Feb. 6th. If you can’t wait till then the entire cd is available for streaming on the website.

So, last week or so Aquarium Drunkard posted a small blip about a band called Backyard Tire Fire. I had never heard of them but he compared them to the Drive-by Truckers in a round about way so my interest was immediately peaked and I checked out the .mp3 he had posted with the entry. I am not entirely sure where the DBT comparison came from….first comparison that jumped out to me was Black Rebel Motorcycle Club….I guess this could be a case study in two people listening to the same song and hearing two different things. None the less, I was intrigued enough to pick up their latest full length “Bar Room Semantics” released in January of 2005. The cd opens up with it’s three, in my opinion, weakest tracks….I was just about to take it out of the cd player and forget about them but then the track Spinnin’ Around started….it’s a song that would fit perfectly on any Capricorn-era album….and there you go…I was hooked. From there the cd winds lazily through songs of bad luck, hard nights and hope in a style/sound that is *very* reminiscent of Roger Hoover and the Whiskeyhounds. They have a new cd entitled “Vagabonds and Hooligans” scheduled to be released on January 30, 2007 and you best believe I will be placing an order. They also recently released and EP entitled “Skin and Bones” in August…personally, I am not an EP kind of guy so I am just gonna let Bar Room Semantics tide me over until the new cd gets released.

*sigh* another band I like that will never some to Florida…