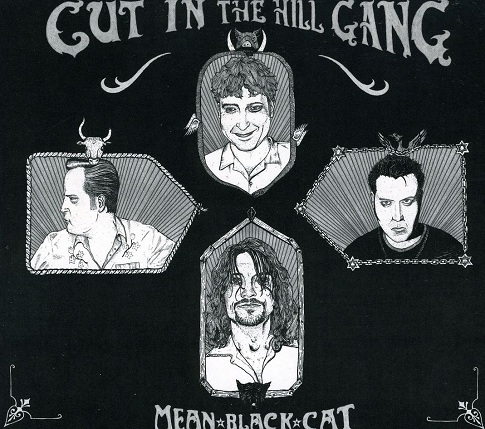 When is an album greater than the sum of it’s parts? When you take 4 established front men, put them in a room together and have them record 10 covers of everyone from John Lee Hooker to Gary U.S. Bonds and the MC5 in their own way.

Meet The Cut In The Hill Gang.

The Cut In The Gang are (were?) Johnny Walker formerly of the Soledad Brothers, Lance Kaufman of StarDevils, Reuben Glaser of Pearlene and our man James Leg of The Black Diamond Heavies. Their record, Mean Black Cat, has been out for quite a while now but since it has no US distribution it has no press. I’d almost forgotten to write about it until I put it on the speakers this morning and decided to write about it right now before I forgot again.

This record is raw. It’s ragged. This record makes you wanna fuck your woman and punch your neighbor in the face while it, equal parts, caresses and punishes your speakers. This record is a sweaty summer night in a dirty bar with an undersized air conditioner. This record is what the term “Deep Blues” was coined for.This record is primal. This record finds the essence of rock and roll and doesn’t give it back.

This record is not easy to find but find it, you should…